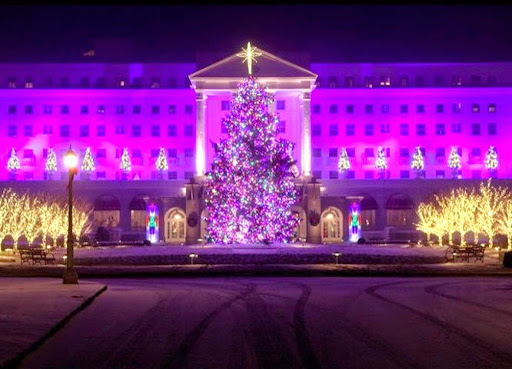 More than four million holiday lights sparkle at the historic Mission Inn come December, as part of Southern California's traditional Festival of Lights. The hoopla includes more than 400 animatronic characters-plus a 12 Days of Christmas cocktail menu (including hot chocolate and a Partridge in a Pear Tree with Absolut Pears vodka), plus holiday packages for rooms ranging from budget to swanky.

The Greenbrier must have been good this year-both Santa and Mrs. Claus are in residence. Its festive "60 Days of Holiday Cheer" now through New Year's boasts Saturday tree lightings, gift-wrapping workshops, ice-skating, carolers and photos with Santa, of course. Even Queen Elsa from Frozen will be celebrating this year, The Nutcracker ballet will perform December 27 and 28, and wine tastings and a Gingerbread Ball dot the calendar.

The High Line Hotel has history on its side during the holiday season - 'Twas the Night Before Christmas was famously written on the property in the 19th century. The hotel sits on the site of the original Chelsea estate (in the Chelsea neighborhood of Manhattan),which was once owned by Clement Clark Moore, who wrote the poem after being inspired by the charming chimney and fireplace - that are still there to this day. Check in for two nights from December 21 to 26 for special Christmas treats, including hot cider and a special turndown copy of the hotel's pride-and-joy 'Twas the Night Before Christmas.

If The Nutcracker defines Christmas for you, head straight to Hotel d'Angleterre, which is spreading holiday cheer this year via the Mouse King and Land of the Sweets. The hotel caters to children with all kinds of surprises and treats-and adults must try Danish glogg (mulled wine).

In the sun-soaked tropics, the Aruba Marriott Resort is ushering in the sweet scents of holiday with a 64-square-foot Sugar Village. Edible versions of 23 local landmarks will be spotlighted, including the Lighthouse and Alto Vista Chapel. The pastry chefs will be working overtime all month - kids can decorate their own gingerbread house to take home, as well as a small Christmas tree that can be brought up to their room during their stay. On Christmas Eve, Mrs. Claus will be on hand with loads of cookies and milk.

Las Vegas goes over the top for pretty much everything, and the holidays are no exception. The famous Caesars Palace fountains are transformed into an ice rink for December; go skating and then warm up with festive cocktails like the Ughly Red Sweater and Inner Elf. Seasonal spa treatments inside the hotel's Qua spa include a Gingerbread and Marshmallow Melt scrub and Great Pumpkin Facial. And then there's the power-shopping next door at the Forum Shops, where stores like Henri Bendel and Swarovski go all out with their window displays-plus the brand-new Linq across the street, which will explode with Christmas cheer.

It's beginning to look a lot like Christmas at Harbor Beach Resort, thanks to a six-foot-by-12-foot candy creation for the hotel's famous lobby display. The edible wonderland is made of 500 pounds of powdered sugar, 400 pints of chocolate, and 100 pounds of sugar accoutrements and candies. This year's masterpiece will feature a Christmas-by-the-sea motif, since the stunning property overlooks the Atlantic Ocean.

For a more modern take on the holidays, head to Il Salviatino in Florence for a funky 70s-themed holiday party that's going off until early January, per Italian tradition. The celebrations include elaborate parties, five-star dinners - plus special promotions at the grand Italian hotel. The over-the-top parties are inspired by 70s classics like Saturday Night Fever, but the hotel's Tuscan views and 15th century villa are timeless.

Like its sister property, Il Saviatino, Palazzo Victoria is throwing a 70s-worthy disco to ring in the holidays, now through early January. Historical Verona might seem like an odd place for an American Hustle-themed Christmas, but the Italians have a long-standing tradition of adding costumes and merriment to any celebration. Book now for special holiday rates, and to receive invites to cocktail parties and fancy feasts.
Was this article helpful? Yes -0 No -0124 Posted by: 👨 Dollie M. Barlow